First and foremost,
I am a nerd/geek of many fandoms.

I’ve played Dungeons and Dragons since the 80s, at the dawn of ADVANCED D&D.  I even created a world with the detail and depth that can be the basis of a series of novels (more on this at a later time).

I played Atari BEFORE it was designated as the 2600. I waited in line with my mom when Space Invaders came out for it. Newer games? I play Injustice – Gods Among Us, and practically ALL of the LEGO Games on my PS3. I’ve recently been trying my hand at MASS EFFECT and SHADOW OF MORDOR.

Pentium? Nope, earlier. Commodore 64? Even a little earlier than THAT – My first computer was a Timex Sinclair 1000, complete with its 16K ram pack (which cost the SAME as the computer itself), using a cassette deck for its data input.

After the newspaper I worked for closed down, I was ‘given’ my Mac G4 workstation, but I’m plowing through with my Acer quad core Laptop, using 2 external monitors. I use it to make art, as my hands aren’t what they used to be and I can’t draw that much anymore. It’s also what I make my videos on.

In the “Hierarchy of Geeks”, I’m at the top of the food chain, baby!

So, what will you find around here?

I’m a fan of Famous Monsters of Filmland – a publication started by the late, great Forrest J. Ackerman – and you can see the reverence I hold for that by a term that you will notice appearing quite frequently here at Draconic Verses:

Imagi-Movies – This is a term coined by the aforementioned Mr. Ackerman, to discuss basically any film that utilizes special effects of one form or other that captures the imagination of its audience. I use this term because (and I wouldn’t be surprised if ‘Uncle Forry’ felt the same) it sure is a LOT easier than constantly writing the words ‘Science-Fiction/Horror/Fantasy films’ repeatedly.

What I’ll Talk About Here

Though I love many types of movies, I confess that I love watching monster movies more than any other. When I say monster movies, I mean monsters like Godzilla, King Kong & the Frankenstein Monster, as opposed to the deranged serial killers like Jason Voorhees & Michael Myers. I’d much rather watch an old Universal Horror film than a modern gore-fest. I’ll be posting about anniversaries of their initial releases in their country of origin (and will indicate their American release, if foreign). If a DVD/ Blu-Ray for one is released, I’ll try to make notes of the release. While I can’t guarantee reviews for newer releases, I’ll do my best to review some older ones that you might still be able to get your hands on!

I’ll be talking about fantasy films and science-fiction and older horror movies. I much prefer pre 1960 horror films, as they were more inclined to frighten with the story and the occasional monster as opposed to relying upon the movie being a complete and utter gore-fest. Not saying it’s a bad genre, just simply not in my wheelhouse.

Also in my wheelhouse are Sci-Fi/Fantasy TV shows (especially classic shows) and cartoons in general. I also will probably wax nostalgic about gaming or old comics. I’ll also be showing bits and pieces of my various collections. There might also be some regional references, so I’ll apologize for that in advance. I’ve lived on Long Island all of my life and in the 60s and 70s we had some great local shows and fun movie broadcasts as well. But hey, it’s New York, baby! What’d ya expect?

I’ll also probably continue to post some of my digital art every so often as well as share some of my designs.

Why ‘The Draconic Verses’?

Well, I’ve always loved Dragons. It was this love that piqued my interest in watching The Hobbit – the animated Rankin-Bass TV movie in 1977 – because they had a huge, moving, smoke-breathing Smaug in the Thanksgiving Day Parade, days before the broadcast.
It was this love that made my Dad think I might like Godzilla.
Dungeons & Dragons is a no brainer.
I’ve also displayed somewhat Draconic characteristics – I tend to collect my treasures & protect them.
The topper? 1964, the year I was born, was the Chinese calendar year of – you guessed it – The Dragon.
Need I say more?

I DO want to say though, that the number of villages I’ve razed has been grossly exaggerated. Really. It’s LESS than has been said.
For the most part.
Honestly.

So welcome my friends, and enjoy your reading of The Draconic Verses.

Look For Me On the Interwebs!

Drop By the Resort! 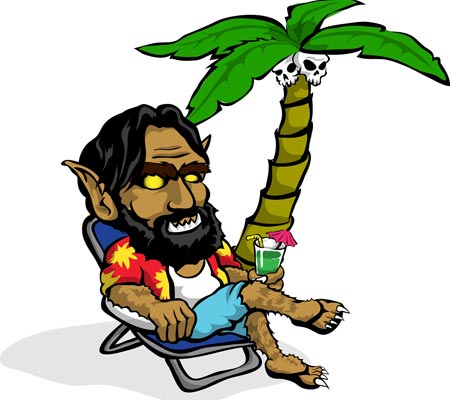